Torn & Frayed were a bluesy rock band from Blackpool, Lancashire (UK) during the late eighties and first half of the nineties. The band was made up of several members but the two constant members were Ashley Hurst on lead vocals and rhythm guitar and Andy Roberts on Bass and backing vocals (and occasional lead vocal).

Other members at various times were a lad called Dave from Rotenstall on drums, Dave McCrudden from Thornton on guitar, Alan Hackney from Lytham (and later Sheffield) on Drums, Nick Cottam from Blackpool on drums (we had problems with drummers), Pete Hughes from Bispham on keyboard, Dan Hoffman on lead vocals, Embryo on guitar, and Danny Horsefield from Rochdale (god know where he is now) on lead guitar.

The following downloads are from two different sessions, the first recorded in a top studio, the second in a "DIY" standard studio. the second is best! Thanks to Alan Pill (formerly of The United States of Mind and Funky Jungle/Rosa Rugosa) for guesting on the acoustic guitar in the 1992 demo and also for helping out with producing. Also thanks to Russ Smith from The Fury for the backing vocals on Lady Sings The Blues. 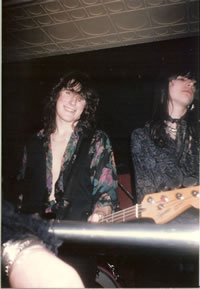 I've tried to remember all the tracks we covered and all the original stuff - if I've missed any please let me know...

Now for the original stuff... 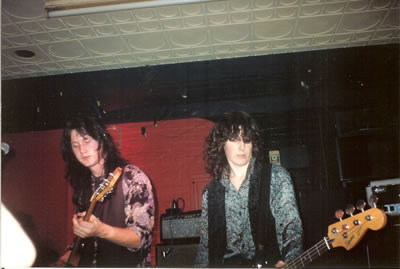 Ash & Andy playing at The Jaggy Thistle in Blackpool 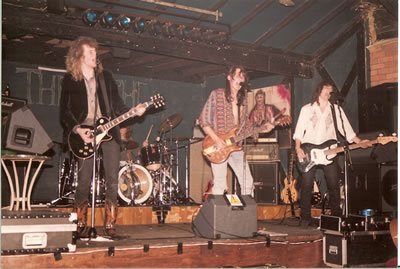 As a four piece all three front of stage took their turn to sing lead vocals - very Georgia Satellites. This is Dave, Ash and Andy at the Tache in Blackpool probably sometime around 1991.